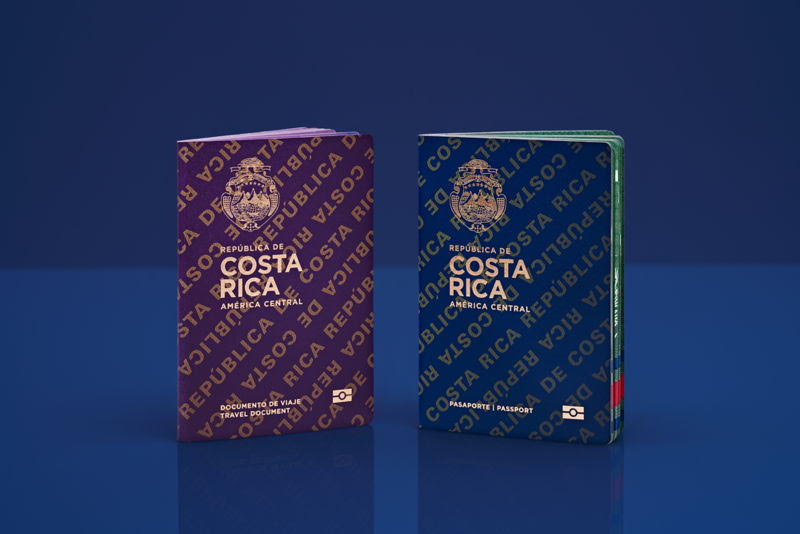 Veridos, a world-leading provider of integrated identity solutions, and the Latin American systems integrator GSI Sertracen have announced the signing of a major contract with Costa Rica. The General Department of Migration and Immigration of the Republic of Costa Rica has entrusted Veridos and GSI Sertracen with the supply, installation, and implementation of next-generation electronic passports and the personalization system. Veridos will also supply its CLIP ID solution for outstanding color image performance.

The contract between the Costa Rican government and Veridos along with GSI Sertracen will allow the country to elevate its ID technology thanks to the delivery of ePassports with a polycarbonate data page as well as the software and hardware for personalization. The ICAO (International Civil Aviation Organization) compliant passports include Veridos’ CLIP IDhigh-tech color personalization technology to ensure the ultimate color brilliance of each ePassport holder’s image, improving visual verification. CLIP ID creates vibrant color photos using the advantages of both laser engraving and ink-jet printing.

Marc-Julian Siewert, CEO of Veridos, says: “We are very honored to have been chosen by the General Department of Migration and Immigration to be part of the modernization of their ID landscape. Together with GSI Sertracen, we will successfully transform the current machine-readable passport system to a fully-fledged biometric travel document solution. Costa Rica is one of the most advanced countries in Latin America and their passports with our cutting-edge CLIP ID color picture solution will soon reflect that, too.” 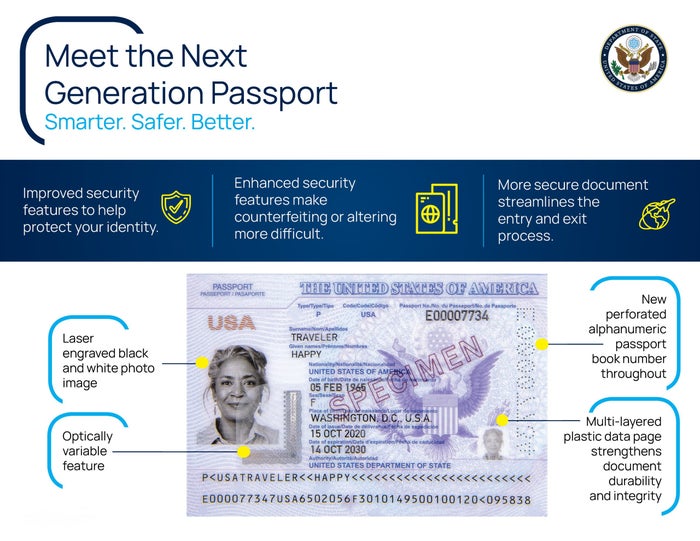 US set to unveil new ePassport design this summer

The US plans to roll out a major ePassport overhaul over this summer with the so-called “Next Generation Passport”  (NGP) set to include a wide range of new security and design features.

More than 2 million Next Generation Passports have been already issued to Americans since last March, but the issuing will really step up this year, according to the State Dept.

The Next Generation Passport book (NGP) uses new technologies to produce a more robust passport with enhanced security features, such as a polycarbonate data page, laser-engraved personalization, and updated artwork.

The most noticeable changes to the new passport book are the polycarbonate data page and the location of the endorsement page (now page 3). Visa pages have also been updated with detailed linework and ink colors that showcase imagery of U.S. architecture, history, culture, landscapes, and traditions. 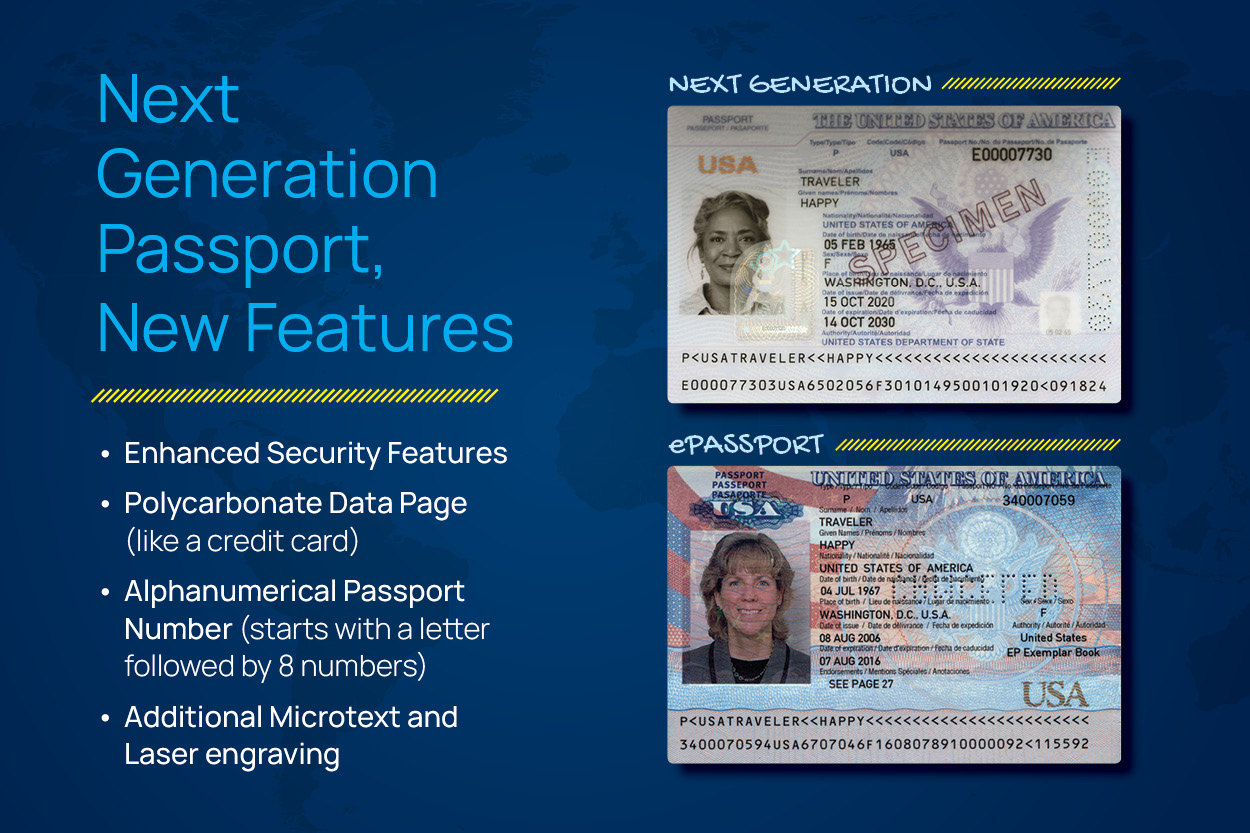 The standard size of the Next Generation Passport is 26 pages. If you frequently travel internationally and need more visa pages, you may choose the larger, 50-page book when you apply. The ePassport has 28 pages in the regular-sized book and 52 pages in the larger book.

The passport number in the NGP book begins with a letter, followed by eight numbers. It is located in the top right corner of your data page and is included throughout the NGP book on the bottom of each page.

The State Dept added that it is only gradually replacing existing ePassport printers with NGP printers at our passport agencies and centers. Since ePassports continue to meet and exceed international passport security standards, both ePassports and the NGP can be used for international travel.

The US is also only issuing the NGP for passport books. It plans to “soon” upgrade and modernise the passport card. 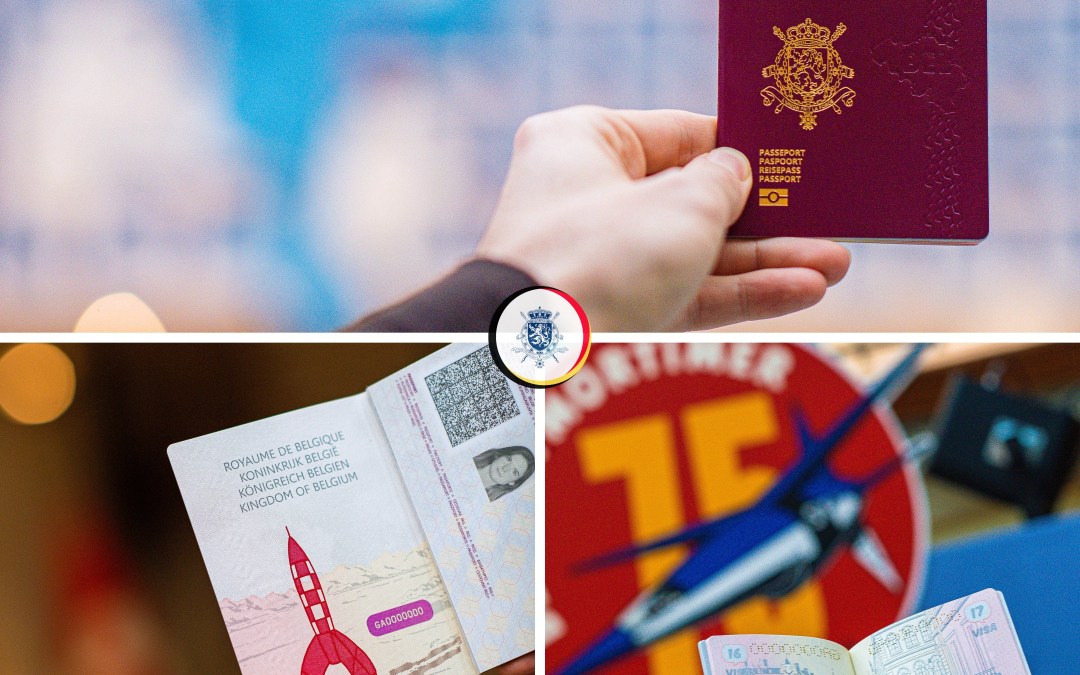 The new Belgian ePassports celebrate the country’s most famous comic strip characters, including Tintin and the Smurfs, alongside new security features

From February 7, the country now issue passports defined by images of its comic strip heroes.

In a statement, the Belgian government said, “The new Belgian passport will be recognizable thanks to its original design, which honours one of the jewels of our culture: the heroines and heroes of comic strips.” The statement also said the new passports, which were developed with the help of anti-fraud specialists, will be safer than the previous ones.

Tintin’s famous moon rocket and the Moulinsart mansion of his friend Captain Haddock will feature in new passports, as well as the Smurfs and cowboy Lucky Luke.

According to Design TAXI, the complex illustrations might make it difficult to fraudulently duplicate the 32-page document. Despite its new features, the price of the new passport will remain unchanged.
In a related development, the Belgian Ministry of Foreign Affairs, tweeted, “On the occasion of the launch of the new passport, a temporary exhibition on the history of the Belgian passport will run at the Comics Museum (Zandstraat 20, 1000 Brussels) from January 28 to March 6, 2022.” 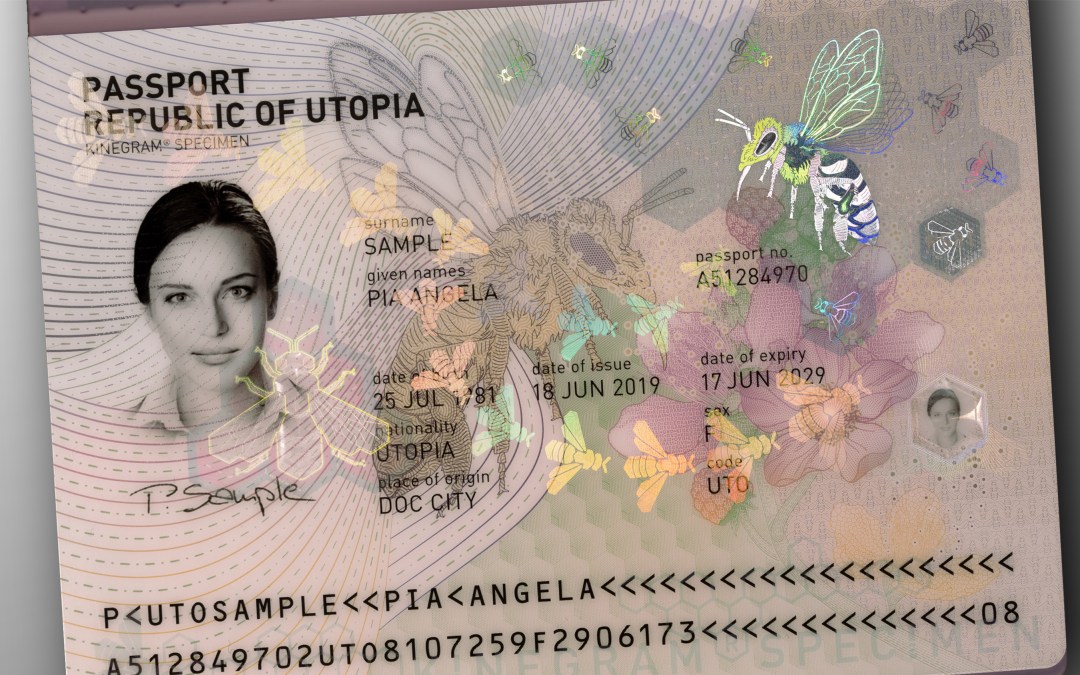 The next generation in secure polycarbonate documents

The digital transformation is changing both the environment and the conditions for authenticating documents. Trained document examiners at the borders generally have less time to inspect travel documents and some others are required to detect evidence of document fraud based on images or videos captured remotely. Simultaneously, providers of mobile onboarding software solutions are challenged with the opportunity to use artificial intelligence, where machines and mobile devices equipped with software algorithms capture images and perform template matching to confirm authenticity.

It is with these trends in mind that OVD Kinegram has introduced the KINEGRAM® PCI with Full Data Protection (FDP) as an example of the next generation for data page protection in polycarbonate documents. As depicted in the generic “Bee Design” shown below, the ability to integrate the embedded Kinegram elements over a larger area in perfect optical harmony with other features such as the pre-printed patterns and images, leads to an overall document design which is intuitive and self-explanatory and hence suitable for quick and reliable human inspection. The FDP solution is suitable for both ID3 format passport data pages and ID1 format identity cards or driver’s licenses.

The optically brilliant metallized image of a bee can be seen collecting nectar from a flower in the background print design. The wings of the bee, depicted by fine metallic lines, flap as the document is tilted indicative of perfect registration between the metal and diffractive structures which is characteristic of the KINEGRAM ZERO.ZERO® technology.

Another bee which overlaps the laser-etched primary photo is prepared as a transparent image with a virtual 3D effect. The body of the bee appears to protrude from the surface. Running a finger of the image confirms that it is completely flat and non-tactile.

While this Kinegram design is ideal for human inspection, the individual security features of the Kinegram are designed to be amenable to computer vision and optical machine authentication using desk-top document readers and mobile phones.

On Monday, the Commonwealth of Dominica launched its new electronic passport. Officials said that the new document is highly secure and would protect holders from identity theft, and would be an essential component of its border management systems. According to the Honorable Rayburn Blackmoore, the Minister for National Security and Home Affairs, Dominica’s passport holds a powerful rank globally. He added that the new e-passport book is designed by Canadian Bank Note (CBN), a Canada-based corporation.

Dominica’s biometric passport will store the holder’s personal information on a microchip embedded in the document. This includes biometric face, fingerprint, and iris data, all of which can verify the holder’s identity while travelling. The Dominican government has previously noted that the document is compatible with the country’s new e-Gates, which means that holders will be able to use them to pass through border checkpoints more quickly. The e-Gates were part of a $13 million project to update the Dominican border in anticipation of the biometric passports.

At the launch, Tourism Minister Denise Charles said that “electronic passports should make the immigration checkpoint process must faster and would allow immigration officers to quickly authenticate travels, first providing protection against identity theft and fraud.” The minister also said that the new venture would improve linkages with the CARICOM Joint Regional Communications Centre (CJRRCC) as well as International Police (Interpol).

The biometric passports will also be issued to those who gain citizenship through Dominica’s Citizenship by Investment (CBI) Programme. The programme offers citizenship to foreign nationals who make a qualifying investment in the island’s Economic Diversification Fund or select real estate projects.

Applicants to the programme who pass the necessary due diligence checks receive Dominica’s citizenship and can apply for the country’s passport, which grants global mobility to over 140 destinations across the seven continents. Being a citizen of Dominica also means being able to live, work and travel in the Caribbean island whenever you want and passing the citizenship on for generations to come.

Dominica’s CBI programme is legally entrenched in law, and since local law does not contain any restrictions on holding dual nationality, obtaining second citizenship through investment in the country is a confidential process. In addition to having no physical residency obligation, Dominica’s CBI programme has no language, age, business experience, or educational requirements, and there is no mandatory interview.