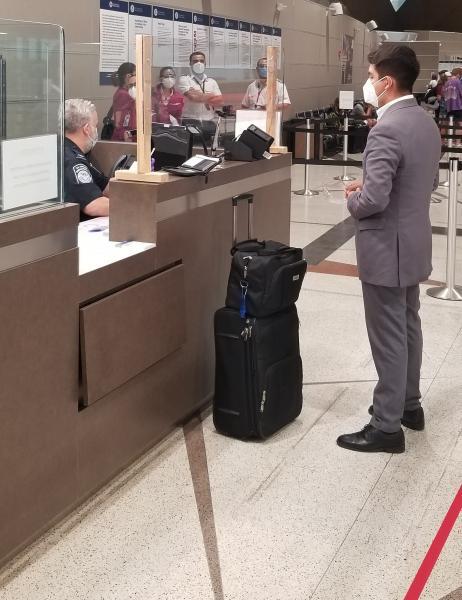 Simplified Arrival is an enhanced international arrival process that uses facial biometrics to automate the manual document checks that are already required for admission into the United States. Facial biometrics provide travellers with a touchless process that further secures and streamlines international arrivals while fulfilling a longstanding congressional mandate to biometrically record the entry and exit of non-U.S. citizens.

“CBP is excited to partner with the Kansas City Aviation Department to expand the use of facial biometrics for international arrivals at KCI,” said LaFonda Sutton-Burke, Director, Field Operations – Chicago Field Office. “This enhanced process is secure, touchless and supports the travel recovery efforts, while protecting the privacy of travellers.”

“CBP shares our commitment to customer service and is a great partner,” said Kansas City Director of Aviation Pat Klein. “Their technology continues to make arrival in Kansas City as fast and easy as possible, while giving travellers options. Simplified Arrival is quick and touchless with the CBP officer doing the work, and Mobile Passport Control still exists for travellers who wish to be more hands on.”

Simplified Arrival pairs one of the industry’s highest ranked facial comparison algorithms (as assessed by the National Institute of Standards and Technology) with trained CBP officers who are skilled at verifying the authenticity of travel documents. If a traveller cannot be matched to a photo on record using the Simplified Arrival process, the traveller will proceed through the traditional inspection process consistent with existing requirements for entry into the United States.

Travellers who wish to opt out of the new biometric process may notify a CBP officer as they approach the primary inspection point. These travellers will be required to present a valid travel document for inspection by a CBP officer and they will be processed consistent with existing requirements for admission into the United States.

CBP is committed to its privacy obligations and has taken steps to safeguard the privacy of all travellers. CBP has employed strong technical security safeguards and has limited the amount of personally identifiable information used in the facial biometric process. New photos of U.S. citizens will be deleted within 12 hours. Photos of most foreign nationals will be stored in a secure Department of Homeland Security system.

CBP and its air travel partners are expanding the use of facial biometrics through public-private partnerships to not only fulfil the Congressional security mandate, but also to further secure and enhance touchless travel wherever identity verification is required for international travel.

To date, more than 86 million travellers have participated in the biometric facial comparison process at air, land and sea ports of entry. Since September 2018, CBP has leveraged facial biometrics to prevent nearly 850 imposters from illegally entering the United States by using genuine travel documents that were issued to other people.

More information about CBP’s efforts to secure and streamline travel through facial biometrics is available here.